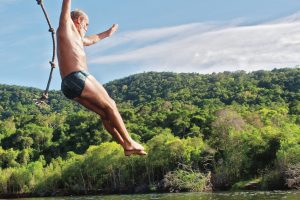 What used to be science fiction is now becoming a reality, as preventative health campaigns and advances in drugs and medical technology keep us living longer. But how can we get there with our bodies in good condition?

In our grandparent’s day, reaching the age of 100 was a rarity and people who reached it were considered curiosities – they would be photographed and written up in the local paper.
But centenarians are no longer so unusual; there are now around 4,400 in Australia, which is more than double the number of 20 years ago. (Interestingly, 3,400 of them are women and only 1000 men.) By 2020 there will be 12,000 centenarians in Australia, and by 2050 there’ll be 50,000.
Why the rapid increase? It is due to a number of factors. One is that modern medicine has become very good at keeping us alive. Where once we died of the diseases of old age such as heart disease, stroke and cancer, we now are much less likely to get them and when we do, more likely to survive them for longer, or even be cured of them.
Advances in medicine such as new drugs, and new medical technologies such as replacements for body parts like heart valves and artificial joints, have played a big part; so have better ways of detecting disease earlier, such as the introduction of mass screening programs like mammograms for women over 50, and more accurate blood tests and scans. Public health programs such as vaccination, anti-smoking, safe drinking, exercise and healthy eating programs have encouraged us to curb our unhealthy behaviours and look after ourselves better.
Not only have these things led to an increase in our life spans, but they have produced a better quality of life along the way. After all, there is not much point living to 100 if we are suffering multiple chronic diseases. All these advances have led to many people living free of any major chronic illness well into their 80s and 90s.
But unfortunately the human body was not made to last indefinitely. The degenerative conditions of old age can be slowed, but they cannot be cured. Arthritis, heart disease, fading vision and hearing, thinning bones, declining mental abilities: all of these are more likely the older we get. Like an old car, the human body eventually runs down and one day comes spluttering to a standstill.
However scientists are still trying to discover why this is. There is considerable variation amongst people as to how rapidly the body does deteriorate as we age.

It is in your genes

To a large extent, our biological make up determines how long we will live, how long we will stay healthy and what diseases we will get as we age. Our biological make-up is determined in turn by our genes, the genetic information carried in our DNA and passed on to us by our parents.
In this respect, our parents’ health is often a good rough indicator as to what we can expect for our own health and longevity. The longer our parents live, the longer we can expect to survive. That is why doctors often ask after the health and age at death of our parents when taking a medical history.
Many common diseases, such as cancers, high blood pressure, heart disease and diabetes tend to run in families; this does not mean if you have one or more of these diseases in the family that you will necessarily get them, but it does increase your risk.
Conversely, if you do not have any of these conditions in the family, and your parents live to an advanced age, you are likely to live longer and in good health.
Women also have a genetic advantage over men. The sex hormones in their bodies during their reproductive years, hormones such as oestrogen, give them a protective effect against diseases such as heart disease and stroke.

However, even with the effect that genes play, you do have a huge amount of control over how long you remain healthy and what age you live to. Lifestyle also plays a big part in what diseases you get and how you manage them. So to a large degree you can counteract the effects of your unfavourable genes by looking after your health – and that goes for whatever age you are.
Unfortunately, though, there is a tendency for people to ignore, or put off, taking steps to improve their health, because of the time and effort required. The benefits –  including a longer lifespan and better health in old age – are in the future, but unfortunately humans tend to be often more concerned with the here and now.

‘We are what we eat’, goes the old saying. And there is no doubt nutrition plays a major role in maintaining our health and longevity. A scientific
study published in March this year, in the prestigious Journal of the American Medical Association, found that poor diet is responsible for nearly half of all deaths from heart disease, stroke and type 2 diabetes – the major killers in Australian society.
The study found that people who died from these conditions ate too much salt, too many sugary drinks, and too much red meat and did not eat enough fruit, vegetables, whole grains, and seafood.
Here in Australia, official dietary guidelines recommend eating plenty of fruit and vegetables of different kinds and a moderate intake of red meat (on no more than two days a week). Limit your sugar, salt and saturated fat intake, they recommend. Eat plenty of grains such as wholemeal breads, cereals, rice, pasta, and avoid foods high in saturated fat such as biscuits, cakes, pastries, pies and processed meats.
The so-called Mediterranean diet, follows these principals, and is recommended by many dieticians. It consists of eating primarily plant-based foods, such as fruits and vegetables, whole grains, legumes and nuts, replacing butter with healthy fats such as olive oil, using herbs and spices instead of salt to flavour foods, limiting red meat to no more than a few times a month, and eating fish and poultry at least twice a week.

The human body was not built to sit down all day in front of a screen. It requires regular physical activity to keep its muscles and bones in good
shape and keep the chemical processes inside the cells working properly. Experts say you need to do at least 30 minutes of moderate exercise a day.
What kind of exercise? This depends on your age and physical condition. If you can manage it, running, swimming, working out in the gym, and playing sports of all kinds, are all good. For olderor those who have physical limitations, walking is ideal, since it is low impact, needs no equipment, and can be done at any time of day.
Another important measure is an obvious one, but one many people ignore. Do not poison yourself by taking things that are bad for you.
Do not smoke – smokers die on average ten years earlier than non-smokers. But if you do smoke and you give up smoking in middle age, your survival improves almost to that of non-smokers. Also do not drink alcohol or take recreational drugs excessively. How much drinking is excessive? Australia’s current drinking guidelines recommend no more than two standard alcoholic drinks a day.

You are more likely to live longer in good health if you regularly seek medical advice. This may sound obvious, but many people don’t (especially older men). Over the age of 50, you should have an annual check-up with your GP, who will monitor your health, screen for disease, advise on health measures tailored to
your circumstances and family history as well as change your medications if necessary.
One aspect of daily living that we now know plays an important part in health and longevity, is mental health. Because the of stigma that is
still attached to metal illness, people tend to ignore problems such as anxiety and depression, but they are a significant cause of early death.
Depression and anxiety often lead to, or worsen, other conditions and can lead to risky behaviours, bad nutrition, or alcohol and drug abuse. GPs, psychologists and psychotherapists can help with strategies to combat mental issues.

Even people who do not suffer from a mental illness as such, may experience negative states of mind that can impact their health. Loneliness, social isolation, job and career frustration, relationship problems, issues of sexual identity and family violence, are all factors that can impact your health and can increase your risk of premature death.
But people who are socially active, visit family and friends regularly, who get involved in community activities or voluntary work, are less likely to suffer depression or mental health problems and live longer. The more positive you are as a person, the faster you will recover from illness.
As each year goes by, scientists are making more and more progress in understanding the biology of ageing. They will keep discovering new ways and new technologies to keep our bodies going.
Scientists believe that lifespans will continue to increase, from current 80.3 years for males at birth, and 84.4 for females, until we reach a natural limit later this century of between 100 and 120. Others believe there is no limit and lifespans will just keep increasing.
Nevertheless, we will never be able to completely rely on medical science for dramatic interventions to save us from the jaws of death. The smartest way to live longer is to put time and effort into looking after
ourselves right now.