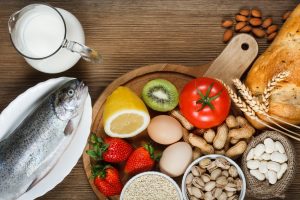 WHY ARE THERE SO MANY FOOD ALLERGIES?

Whether it be nuts, soy, prawns, milk, eggs and even wheat, food allergies are on the rise. Parents are pulling out their hair trying to pack school lunches, throwing a dinner party is now more complex than ever and it seems around every corner there is a new food restriction on the menu.

Managing food allergies in your family can be tricky, but with the right information, it is a piece of cake.

Firstly, it is important to understand what a food allergy is and why we get food allergies at all. When we eat food, our bodies recognise that we have ingested something new. As food moves down our throats and into our stomachs (through our gastrointestinal tract), this triggers a normal immune response, meaning that the body correctly responds to something that is not its own cells. This is termed a ‘dietary antigen’.

In the majority of the population, this is where the immune response stops. Unique cells in the gut called ‘dendritic cells’ interact with these dietary antigens and tolerance is built to the food being eaten.

In contrast, for people with food allergies, the immune system treats food like it is an infection or foreign substance in the body. The dendritic cells in the gut trigger a whole cascade of other immune cells that ultimately label food as something for the body to attack. This reaction is what causes many food allergy symptoms.

Some foods are more likely to cause an allergic reaction than others with just nine foods responsible for over 90 per cent of all food allergies including: cow’s milk, eggs, peanuts, tree nuts (such as cashews or pecans), sesame, soy, fish, shellfish or crustaceans and wheat.

So why are food allergies becoming more common? And what can be done to try and prevent a food allergy?

In Australia, we have one of the highest rates of food allergies in the world. In 2013, a Victorian study, led by Professor Katie Allen, found that one in ten children who were just one year of age had a food allergy – the highest rate ever reported in the world for children this age. Hospitalisations of children with allergic reactions to food have also doubled in Australia over the past ten years.

Of course with any health-related issue, the answer is rarely simple and food allergies are no different. The causes of food allergies, and the reasons why food allergies are increasing are linked to a variety of possible factors ranging from food processing, vitamin D levels, being overweight, the size of the protein molecules in the food and how well it dissolves in water. There is no one culprit we can target for a cure to food allergies.

However, one of the most widely accepted theories for the increase in food allergies is the ‘hygiene theory’ which states that a child’s exposure to various microbes (or lack of exposure) can set up their immune system for life, potentially affecting their risk for food allergies, eczema and other allergic conditions.

Although this theory is not a rock solid cause, there are some interesting examples seen in children who migrate to and from Australia and their risk for developing food allergies. The same Victorian study found that children born in Asia who moved to Australia were protected against food allergies compared to Australian-born children.

The distance someone lives from the equator has even been implicated in food allergy prevalence, with children in Tasmania and southern regions of Australia having an increased risk compared to children in Queensland or the Northern Territory, implicating vitamin D levels from the sun in food allergy risk.

As a parent, it can be stressful to know how to protect your child from food allergies and what to do if they show an adverse reaction to foods.

One of the most common questions asked by parents is when to first introduce a child to nuts, eggs and other common allergic foods. As a general guide, babies are ready to eat solid foods at around six months of age when they can hold their head and neck upright and have begun maturing their mouth and tongue muscles.

It is also recommended to introduce foods that may cause allergies within the first twelve months of a child’s life to potentially reduce the risk of food allergies later in childhood and even adulthood.

Try to introduce foods one at a time to assess how a baby may respond to a particular food. Then move onto another food a few days later. Keeping a food diary of exactly what foods were introduced on any given day is also a good way to track any potential allergic reactions.

Although there is no set guideline on the order in which foods should be introduced, babies need high iron foods early in life. Fortified cereals, meats and poultry are good places to start.

Another good tip is to introduce new foods early in the day (not at night), so it is easier to monitor how a child responds to the food whilst awake. If unsure, a small amount of the food can be placed on the child’s lip to test before offering it to eat.

If you suspect a food allergy in a family member or friend, it is important to know the signs and what you can do to look after them. Some mild symptoms of food allergies include:
• Swelling of the face
• Hives or welts on the skin
• Pain in the gut or vomiting

Some signs of a severe allergic reaction and signs that the person should seek immediate medical attention include:
• Swelling of the tongue or throat and difficulty breathing
• Coughing
• Dizziness or delirium
• Pale and floppy appearance (in children)

Always ask someone if you suspect they have a food allergy if they carry an EpiPen (or an adrenaline autoinjector) so you can be prepared if there is an emergency.

So fancy packing a peanut butter sandwich in your child’s lunchbox? What about a pecan pie for dessert?
It is best to fully understand what food allergies are and how to deal with them before sending the invite.

For more information on food allergies and how to introduce foods to children visit: www.allergy.org.au